The Owl from Last Night 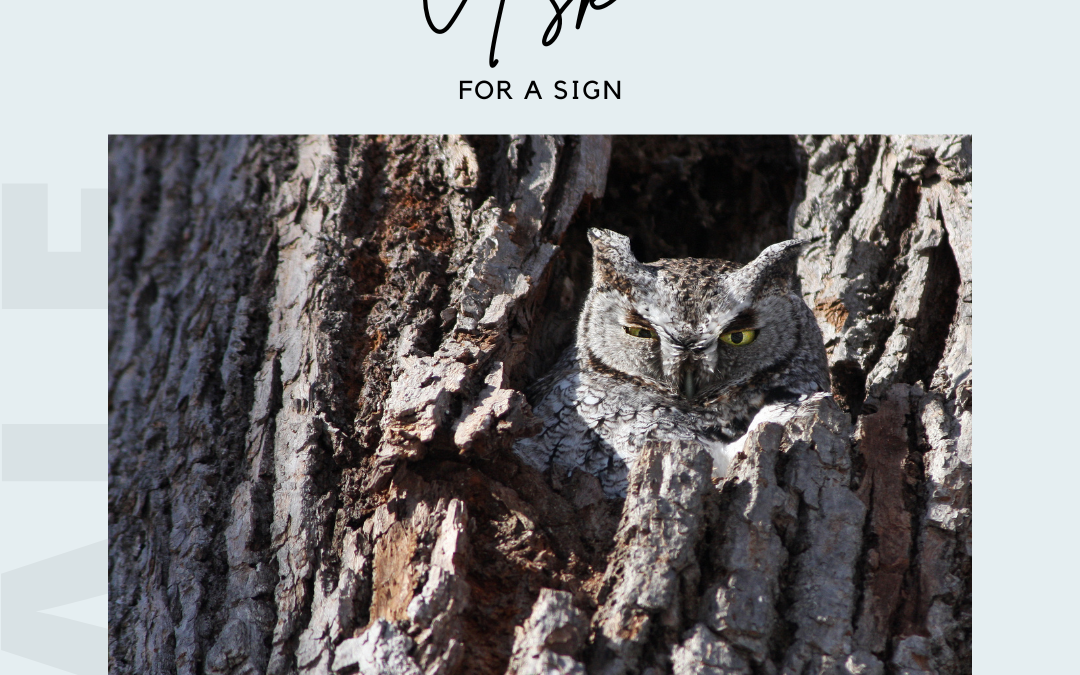 Florence Scovel Shinn was a New Thought author from the early 20th century, which was the school of thought that evolved into the Law of Attraction spirituality. I found a compilation of all her books at the thrift shop on Saturday.

Opening to a random page, I found this:

We really live magic lives, guided and provided for at every step; if we have ears to hear and eyes that see. Of course we have left the plane of the intellect and are drawing from the superconscious, the God within which says, “This is the way, walk ye in it.”

Whatever you should know, will be revealed to you.

Then Florence said to ask for a clear, unmistakable sign. I usually wouldn’t, but I did.

Last night, I was watching the news (I know, I know, don’t do that!) and heard an eastern screech owl in the woods east of the house.

All last winter when I was writing my book Midnight Pages: A Mystical Workbook for Writers, Insomniacs and Night Owls, (especially when I was telling myself that I was wasting my time) I heard owls and I knew they were guides from the Goddess. Keep going. Keep listening, they said.

I still didn’t make the connection.

I got in bed, ready to meditate on the noisy August crickets, locusts and cicadas. And there was the owl, right outside my window, LOUD.

It was so near and insistent, the hair on my neck stood up. I flew out of bed. The dogs went to the window too, but weirdly, they didn’t bark. The hair was up on their necks too.

I remembered: my card pull from the Motherpeace Tarot earlier in the week had been the Priestess of Swords, a woman in the cold wild, releasing a snowy owl toward the full moon.

That bird was screeching at me, saying, “Wake up sleeper! You asked for a sign!! Here I am!”

I finally got it. The owl means wisdom, guidance, Goddess; maybe bad news but I take the good with the bad.

She said: Write, follow your weird, neuro-divergent creativity. Don’t judge, don’t stop. Keep talking about Midnight Pages (my book and writing practice for anyone who just can’t get up early to do Morning Pages).

My owl, my guide/totem animal said: “Stay on the path, don’t give up, guidance is here when you’re ready to hear it.”

Whenever you read this: Ask for a clear, unmistakable sign that only you would understand. Ask for the kind that will make your hair stand up because it is so right. Trust the sign, don’t deny it or talk yourself out of it.

Don’t rush to the internet to interpret the sign like I did. I mean, seriously?? It was midnight (!) and I got an owl. So I search Google for what THAT might mean?

Go within for what your sign means. Trust me, you already KNOW.

Do the thing. Whatever your creative thing is. Don’t even wait for the sign.

If you don’t think this message is for you because you’re reading it 6 months from now or you don’t believe in signs or whatever, believe me, if you’re here, it’s for a reason.

Here’s an affirmation from Florence Scovel Shinn to repeat after you’ve asked for your sign:

I now catch up with my good, for before I called I was answered.

Sharing Love and Blessed Be,